He was an illustrious poet. Amongst the Companions of the Holy Prophet (sa), aside from Hazrat Ka‘b bin Malik and Hazrat Hassan bin Thabit, he was among the three illustrious poets. His poetry was in the Razmiya [epic tales] style.

Hazrat Abdullah (ra) bin Rawaha was also a poet and among those who would respond to the insults of the opponents in defence of the Holy Prophet (sa).

Some of these verses are as follows:

That is, “I recognised the goodness in your blessed being (that is the Holy Prophet (sa)) and Allah knows that my eyes were not deceived. You indeed are the Prophet. Whoever will be deprived of your intercession on the Day of Judgement has certainly been decreed to be worthless. Thus, may Allah grant him [i.e. the Holy Prophet (sa)] steadfastness in the qualities He has endowed him with, just as He granted Moses (as) steadfastness, and may God help him just as the prophets of the past were helped.”

Hisham bin Urwah said that as a result of this prayer, Allah granted him great steadfastness, so much so that when he was martyred and the doors of heaven were opened for him, he entered therein. Ibn Saad relates that when the following verse was revealed:

Hazrat Abdullah (ra) bin Rawaha said that Allah the Exalted is well aware if he is from among them. Upon this, the following verse was revealed:

“Save those who believe and do good works.”

With regard to Hazrat Umar (ra), it is written that he had a fondness for poetry. Although he did not compose any himself, he enjoyed listening to poetry. Hazrat Abdullah (ra) bin Abbas narrates:

“Once I set off with Hazrat Umar (ra) on a journey. One evening, we were walking, when I went near to him, he hit the front of his pack-saddle with his whip and recited the following couplet:

“‘You lie, I swear by the House of Allah’”, i.e. the Ka‘bah, “‘Ahmadsa cannot be martyred; as long as we stand guard and show the might of our spears and swords. We will not leave his side until we are martyred fighting in his presence, and forget all about our sons, our wives and families.”

“‘No camel ever placed on its back a person greater in piety and one who fulfils their promise more than Muhammad (sa).’”

Dr Ali Muhammad Salabi, who is a historian, has written a book, Umar bin al-Khattab: His Life and Times, in which he writes about Hazrat Umar’s (ra) love for poetry. He writes:

“Amongst the al-Khulafa al-Rashidun, the one who presented examples by means of a couplet the most was Hazrat Umar (ra). About him, some people have even written that there was hardly a decision he made and did not recite a couplet regarding it. It is written that Hazrat Umar (ra) once wore a set of clothing and went outside. People began to look at him closely. Upon this, Hazrat Umar (ra) gave them an example by way of the following couplet:

“‘Even the treasures of Hormizd did not save him from death, and the people of ‘Ad tried to live forever. Where are those kings, whose springs and waterholes would quench the thirst of the caravans coming from far and wide?’”

“Hazrat Umar (ra) only liked those couplets which highlighted the beauty of the Islamic teachings; those that would capture the essence of Islam and those whose meanings were not against the teachings or values of Islam. Hazrat Umar (ra) would encourage the Muslims to memorise and learn exquisite couplets and would say that they contained gems which people searched for. Furthermore, it granted wisdom to the wise and guided people to adopt a noble character.

“With regard to the excellence of poverty, Hazrat Umar (ra) also stated it was the key to unlock the heart and a way to promote positive emotions in a person. Regarding the excellence and benefits of poetry, he would say that the best pastime of a person was for them to compose a few verses, which they could recite when needed; through it they could charm a noble and generous person and even attract the heart of a wretched one. He also had a passion to memorise poems from the poets of the ancient times, i.e. poets of the jahiliyya era [era of ignorance before the advent of Islam] because it had a deep connection with understanding and comprehending the Book of Allah. He would say, ‘Memorise your diwan [collection of poems], and you will save yourself from going astray.’ The people asked, ‘What is our diwan?’ Hazrat Umar (ra) said, ‘Poems from the jahiliyyah period. They contain the commentary and meanings of your book’”, i.e. the Holy Quran. “This saying of Hazrat Umar (ra) is affirmed from the saying of his student and commentator of the Holy Quran, Abdullah bin Abbas, whereby he stated, ‘If you read the Quran and are unable to understand it, then search for its meaning among Arabic couplets, because poetry is the Diwan of the Arabs.’”

Whilst mentioning Hazrat Umar’s (ra) fondness of poetry, the famous biographer of the subcontinent, Allama Shibli Nomani writes in his book Al-Farooq:

“Although Hazrat Umar (ra) is not famous for being associated with poetry, and it is true that he would rarely compose poems, he had such an exquisite taste in poetry that this aspect cannot be left out of his biography. He had memorised countless couplets of a famous Arab poet and held his own opinion about the works of other poets. Scholars of literature accept that in his time, there was nobody who would recite poetry more than him. Jahiz writes in his book, Al-Bayan wa Al-Tabyin, that in his time, Hazrat Umar (ra) had the most knowledge and understanding of poetry. Hazrat Umar’s (ra) love for poetry was such that if he heard a good couplet, he would enjoy it and keep on reciting it again and again. Although owing to his responsibilities as the Khalifa, he did not have the time to delve deeply into this pastime, because of his innate love for poetry, he had memorised hundreds and thousands of couplets. The scholars of literature say that his memory for recalling poetry was such that whenever he gave a verdict on a matter, he would always recite a couplet. He would only like those couplets which exhibited traits of self-control, freedom, nobility, honour or teaching a lesson. For this reason, he issued a mandate to the commanders of the army and governors of provinces to urge people to memorise poetry.

“To Hazrat Abu Musa Ash‘ari (ra), he wrote, ‘Urge the people to memorise couplets because they personify lofty morals; show the correct opinions and guide to the path of justice.’ The wording of the command he sent to all the provinces is as follows, ‘Teach your children swimming, horse riding as well as proverbs and good poetry’, i.e. to instil within them a passion for learning.

“It is worth noting that Hazrat Umar (ra) eradicated many wrongful customs associated with poetry. At the time, it was a custom in all of Arabia that poets would mention noble women by name in their poems and openly express their love for them. Hazrat Umar (ra) eradicated this custom and ordered a severe punishment for those guilty of this offence. Similarly, he declared lampooning in verse to be a crime and imprisoned Hautaya, who was famous for this.”

“In those days, the most renowned poet was Mutammam bin Numairah, whose brother was accidentally killed by Hazrat Khalid (ra) during the Khilafat of Hazrat Abu Bakr (ra). This incident affected him so deeply that he would often cry and recite elegies about him. When he went to see Hazrat Umar (ra), he requested permission to recite an elegy and recited a few couplets. Hazrat Umar (ra) said, ‘If I was able to recite an elegy, I would recite it for my brother Zaid.’ He said, ‘O Leader of the Faithful! If my brother was killed in the manner your brother was killed’”, i.e. if he was martyred, “‘I would never lament over his death.’ Hazrat Umar (ra) would always recall that nobody was able to offer their condolences to him in the manner Mutammam did.”

Then we have the companion of the Holy Prophet (sa), Abdullah bin Rawaha (ra) who was a renowned poet of Arabia and was also known by his title of “Poet of the Messenger (sa)”.

Hazrat Saeed (ra) bin Jubair relates that the Holy Prophet (sa) entered Masjid al Haram on his camel and out of reverence for the Hajr-e-Aswad [black stone], he touched it with his staff. Alongside him was also Hazrat Abdullah (ra) bin Rawaha, who was holding the reins of the Holy Prophet’s (sa) camel whilst reciting the following couplets:

meaning, “O disbelievers, make way for the Holy Prophet (sa), for after accepting him, we have dealt you such a blow that removes the head from its resting place.”

Hazrat Qais (ra) bin Abi Hazim relates that the Holy Prophet (sa) told Hazrat Abdullah bin Rawaha (ra) to dismount and have our camels moving, i.e. recite such poetry that shall cause our camels to move swiftly just as was the tradition of the camel riders. He replied, “O Messenger (sa) of Allah, I have abandoned such poetry. Hazrat Umar (ra) then said, “Hear and obey”.

That is, “O Lord, if it were not for You, we would not have attained guidance, given alms or offered prayers. Send down peace and tranquillity upon us and grant us steadfastness when we meet the enemy, for the disbelievers have attacked us.”

Waqee‘ has also narrated this, with the addition of:

“And if they desire to create disorder, we oppose it” i.e. they would put an end to this disorder and not allow it to spread. The narrator then states that the Holy Prophet (sa) said, “O Allah, have mercy on them”, to which Hazrat Umar (ra) answered, “It has been ordained”.

In other words, through the prayers of the Holy Prophet (sa), mercy had been decreed.

“Upon arriving in Medina, the first task was the construction of Masjid-e-Nabawi. The place where the camel of the Holy Prophet (sa) chose to rest, was the property of two children from Medina named Sahl and Suhail, who lived in the guardianship of Hazrat As‘ad bin Zurarah (ra). This was a vacant land, on which a few date palms had been planted in one area. In another area, there were ruins, etc. The Holy Prophet (sa) selected this plot to construct the Masjid-e-Nabawi, and his own livings quarters. This plot of land was purchased for 10 Dinar, or approximately 90 Rupees. The surface was levelled and cleared of trees, after which the construction of Masjid-e-Nabawi began. The Holy Prophet (sa) supplicated to Allah and laid the foundation stone himself. Just as in the construction of the mosque at Quba, the Companions worked as builders and labourers. The Holy Prophet (sa) would also participate at times. Occasionally, while lifting bricks, the Companions would recite the following couplet of Abdullah bin Rawaha Ansari (ra):

‘This burden is not the burden of Khaybar’s commercial goods, which arrive loaded on the backs of animals; Rather, O our Lord! This is the burden of virtue and purity, which we bear for Your pleasure.’ At times, the Companions would recite the following couplet of Abdullah bin Rawaha (ra):

‘O Our Allah! True reward is merely that of the hereafter. By Your Grace, send down Mercy upon the Ansar and Muhajirin.’ When the Companions would recite this couplet, at times, the Holy Prophet (sa) would also join in. In this manner, after a long period of hard work, the mosque was completed.” 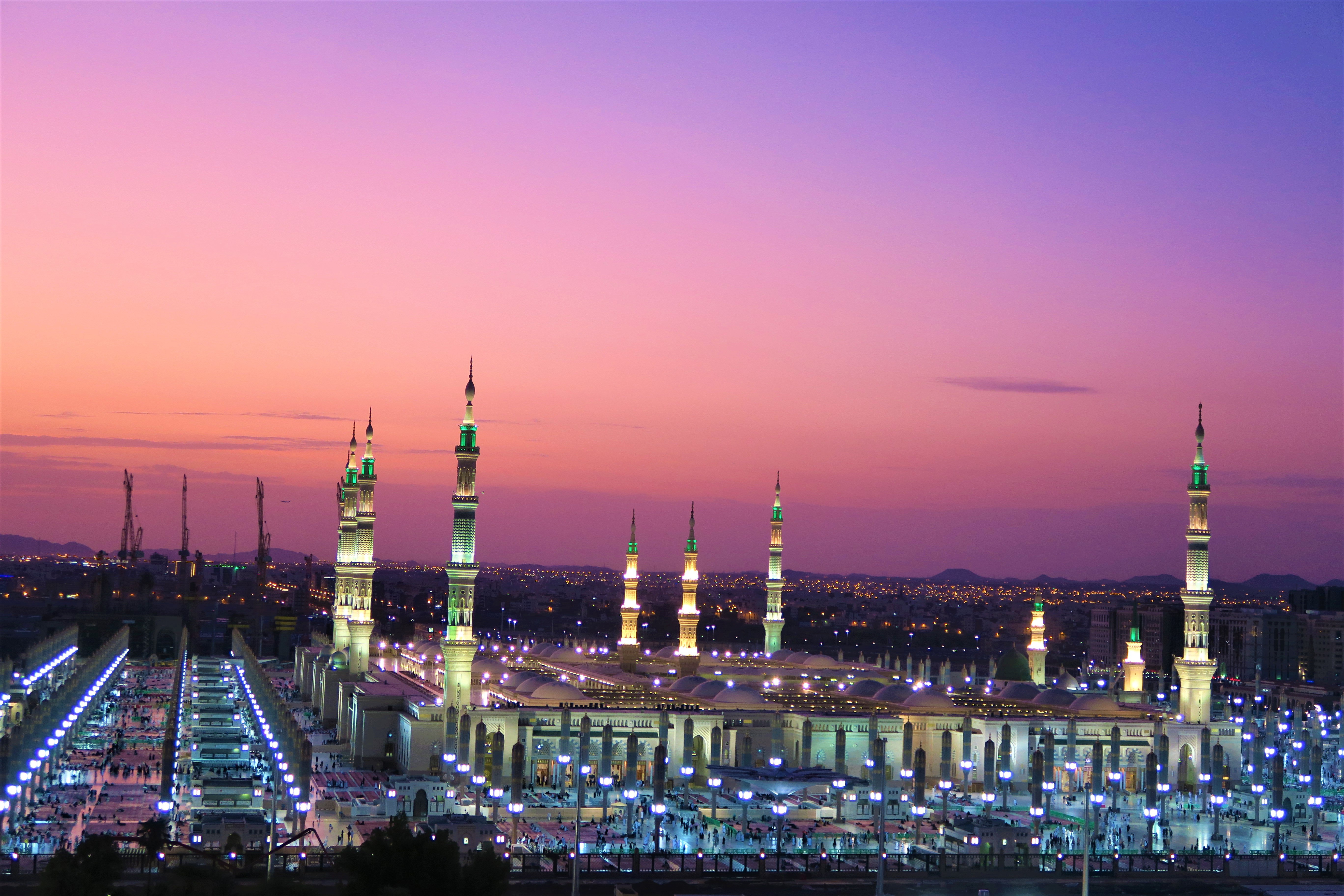